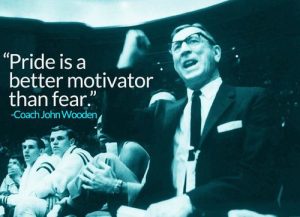 Robin Sharma says, that “the job of the leader is to grow more leaders”. Then why when somebody receives the title “Director” or “Manager” often happens the opposite thing? There are so many leaders without leadership qualities, who try to cover up this lack through simulating some kind of busyness, a lot of talking (yes, they talk always a lot and always “know everything”) and intrigues. Often this kind of “leaders” look nervous and want to make the people of their team nervous and strained too, because even they are stressed by the truth, that are not good enough. In this situation the only way to keep the lie alive is to create the stress in your team. So they do it.

The truth is that the real leader has to lead through INSPIRATION. And where we have fear, there’s no place for an inspiration. The fear says “I’ll do it, because I’m scared for my job place, but I don’t like what I do” – this thing makes people unhappy. I don’t know a good product to be created by unhappy people (the bug always appears on some level). At the same time the inspiration says “I’ll do it, because I like it and it has a meaning”.

The fear in the leadership is the opposite pole of the inspiration and the leaders, who lead through fear are in fact no leaders. They are just amateurs, who want to be leaders, but don’t know how to achieve it.

Be a leader and inspire others. Don’t be afraid to make the world a better place.