Heineken did it again 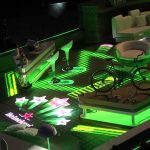 And when I see a worthy and inspiring ad campaign it’s really something, that has to be mentioned. An example for such a campaign is the last one of Heineken in Milan for The Sub – a new device, which aim is to bring premium draught beer to the users at home.

The BTL event in Milan was organized at the most proper place for that – the Design week in Milan.

In fact Heineken created a worthy event (The SUB Livingroom) in the event (The Design week) in an amazing way. The right event for the right place, developed and executed in style and in a funny way, achieving good interaction with the target.

Just live it. Here it is. Enjoy it!